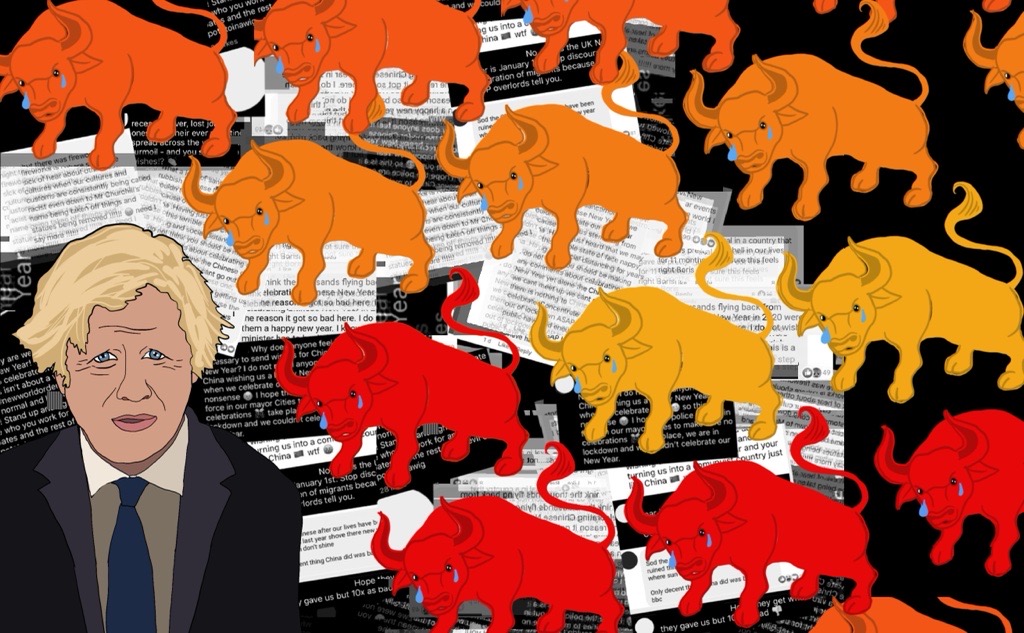 On February 12, Boris Johnson posted a simple video sending Chinese New Year Greetings. Whilst we knew this was an annual occurrence, we initially chose not to actively watch, or even look up the post for the sake of our mental health. Last year’s circumstances have already built up existing hostility towards East and Southeast Asian (ESEA) people in the UK; discourse surrounding anything remotely related to China was undeniably toxic. But that changed when one of us inadvertently stumbled across a compilation of the reactions to the video on the ‘British Born Chinese’ group on Facebook. The sadness and rage provoked in us meant that we could not bear to stay silent any longer.

What is critical in debunking the reactions of the greeting is the content of the video itself. Johnson highlighted the contributions that British-Chinese people make to British society, spoke about the misfortune in how traditional festivities involving large numbers of people cannot take place in the UK, and listed shared challenges that both British and Chinese people are currently fighting – such as COVID-19 and climate change. Most of all, it was an extension of heartfelt regards to communities celebrating Lunar New Year.

However, the comment section contained overwhelming attributions of blame towards ethnically Chinese individuals for the onset of the pandemic. The word ‘they’ was repeatedly used to hold not only the ordinary Chinese citizens, but also Chinese diaspora around the world, responsible for the entirety of the loss, tribulation, and distress experienced in 2020.

Such language is especially hurtful when it is our culture being attacked. Chinese New Year (also known as Lunar New Year) dates back thousands of years, and is an immeasurably cherished festival in any passing year – arguably being the most significant holiday for people of ESEA descent. Representing a time of rejuvenation of all that is important to us, it remains a celebratory period that embodies values of family and community at its core, and seeks an abundance of blessings for the coming year. As first, second, or third-generation immigrants in the UK, we celebrate Chinese New Year as a homage to our heritage, to pay tribute to the traditions that have shaped our upbringing, and us into who we are. Sentiments that somehow claim a link between the celebration of a critical piece of our culture – one deeply linked to our history and innate sense of belonging – to why the British people are currently in lockdown, can only be a reflection of pernicious intentions to generalise, scapegoat, and alienate.

Besides maintaining this blatantly racist rhetoric of collective blame, some directed their resentment towards the actions of the Chinese government. But not once did Boris Johnson explicitly mention the CCP within the greeting. Nor was the greeting directly extended towards a single group or affiliation of people. Indeed, Chinese New Year has nothing to do with how and why the pandemic unfolded, nor can such a widespread, sacred, and deep-rooted festival be logically linked to the actions of the present-day Chinese government in any shape or form. Such attempts to allude to criticism of the Chinese government – or any kind of discourse surrounding the source of the pandemic – is irrelevant in the context of the video, and seeks only to infer a correlation where there is none. Knowing that Lunar New Year exists as a staple festival in most ESEA countries renders the festival no longer synonymous to China. It is the overarching intolerance of ESEA communities that is the underlying sentiment cloaked in the facade of criticism towards the Chinese government.

This act of scapegoating is also rooted in an orientalist attitude, of which manifests in comments expressing disgust, condemnation, and aversion to Chinese cuisine itself. In turn, this portrays Chinese culture and the people associated with it as barbaric and uncivilised. The illustration of Western cuisines holding the moral high ground is hypocritical at its core; Western animal industries can be equally as barbaric as wet markets, and criticism of this is never accompanied by vilifying the people associated with them, or by unjustified comparisons to other cultures. Eating habits across the world have relativist morality; bats might be seen as morally wrong in the West (not that they are a common dish in Chinese cuisine at all), but the ubiquitous presence of beef in Western cuisines has never come under the same scrutiny in the context of culture, despite it coming from an animal regarded as being sacred in Hinduism.

‘Unconventional’ foods in the West, such as snails, frogs, or kangaroos, have similarly never resulted in the inference of Western cuisine being immoral. If the trigger is the consensus that bat-eating was what caused the pandemic in the first place, to conclude that all Chinese cuisine is subsequently primitive is unfounded. Zoonotic diseases can come from any animal, such as the 2009 swine flu pandemic being sourced from pigs. Such disapproval of Chinese eating habits is a gross perpetuation of the Yellow Peril attitude, depicting East Asian peoples and cultures as an existential threat to the Western world. Chinese cuisine, one with an equal chance of starting a pandemic as any other, is blamed instead of holding one’s own Government accountable in combating COVID-19.

The reactions to the greeting might just be baseless generalisations and abuse from behind a screen, but they sit within a wider context of growing sinophobia and xenophobia directed towards ESEA people globally. Hate crimes do not happen in a vacuum; they are spurred by malicious and harmful language that normalise hostility towards ESEA people indiscriminately. The first quarter of 2020 saw a 300% increase in hate crime reports from British East and Southeast Asians, compared to the same period in 2018 and 2019. What is perhaps most disheartening, is the prevailing sense of ‘othering’ imposed on British Chinese people as a result of these responses, and the persistent exclusion we receive, despite contributing so extensively to British society.

The original infographic can be found here. 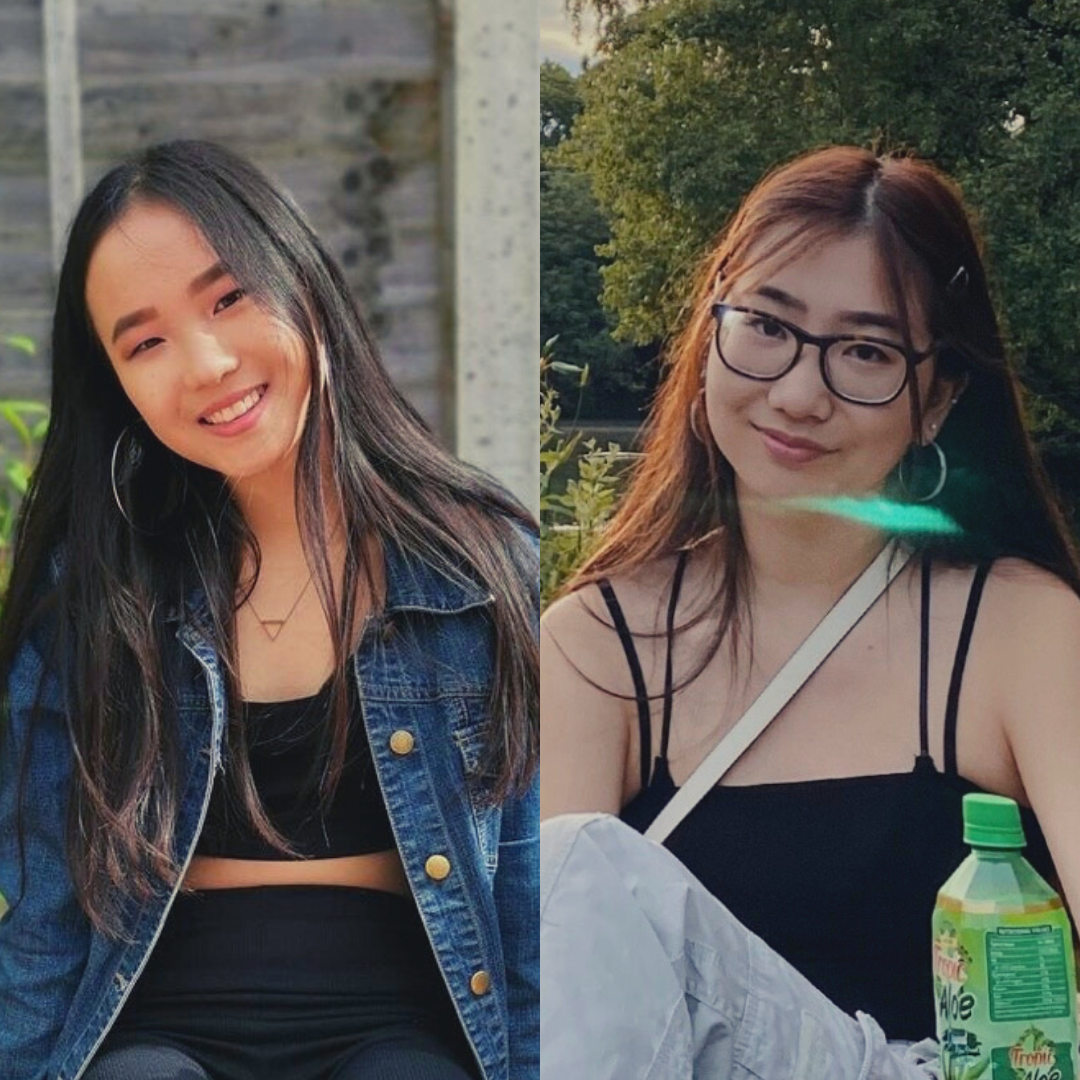